On the occasion of Man.Eknathji Ranade’s birth anniversary our vidyalaya aptly sought to carry out. Annual Sports Day Programme. The dates arranged were 19th and 20th of November 2018. The District level participant Rajendra of VII std, carried the flame and passed it to other sports participants.
The day began with a great show of enthusiasm and alacrity on the  part of not only the students but also the teachers. 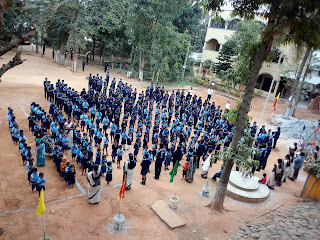 Relay, Running, Ball in the bucket, Kho – kho , Kabaddi, Volley ball etc games were conducted with great efficiency. Lunch on 20th November was arranged by the school. The student performed to the best of their capacity and accepted the umpire’s decision without any rancour. 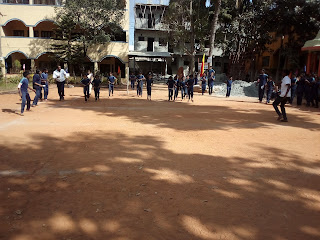 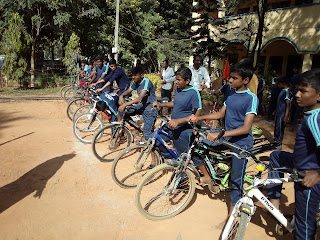 Sports were extended on 21st November due the hectic schedule and variety. Minal didi and Jayanthi didi commentated on the sports matches.This was continued by Irappa sir on 21st . Running commentary was a novelty. But the most praiseworthy feature was the great discipline maintained by both primary and secondary school students. The sports meet was concluded in great spirits and on a positive note thank you.

Popular posts from this blog 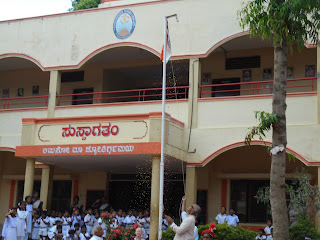 GURUPOORNIMA :          On 31st Gurupoornima was celebrated.On the importance of the day Smt. Ambika delivered a speech. Students sang bhajan on Gurumahima. Flower were offered at the holy feet of the guru Vyasa by the teachers and students. Competitions were conducted for the students from UKG -7th std on guru shlokas. INDEPENDENCE DAY :                 On 150th August Independence Day was celebrated Sri Ravi kumar was the chief guest. He is a retired bank manager. He had worked in different banks in Bangalore and Pondichery. He unfurled the flag and took the Guard of Honour. Students did march past with bands. They received a great applause from the public. They also displayed  different formations.   RAKSHABANDHAN CELEBRATION:           On 29th August Rakshabandhan was celebrated in grand way. Smt. Kaveri ( one of the teachers ) delivered  a speech on the importance of Rakshabandhan.  Students sang bhajans on Krishna and Radha.  The teachers of LKG and UKG perfo
Read more 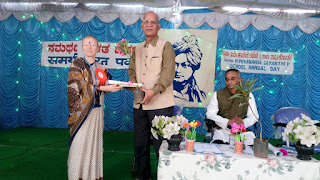 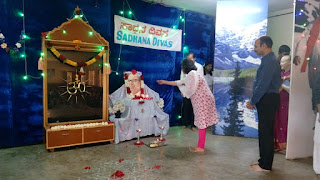 VIVEKANANDA KENDRA VIDYALAYA – KALLUBALU REPORT ON SADHANA DIWAS DAY  CELEBRATION Sadhana Diwas was celebrated in VKV Kallubalu on 17 November 2018.  Song and speech on  Mananeeya Eknathji by students and teachers were the part of the programme. Su.Sri Usha didi and Shri.Karthikji were the  chief guests.  On 17/11/2018 , Saturday Sadhana Divas was celebrated in our vidyalaya. The programme began sharp at 8:30 am. After the National Anthem Kannada song, speech by 8 th std student [ Jayaraj], Hindi song, Speech by the teacher [ Nikhil sir ] were conducted. Song by 10 th std girls was the final performance. Entire assembly was managed by Ramakrishna House. Su.Sri Usha didi and Shri.Karthikji were the spontaneous chief guests . the programme was conducted with discipline and exhuberant enthusiasm. The vote of thanks was delivered by Nikhil sir. The programme was concluded with Shantimantra.
Read more